The religiously unaffiliated in Mexico: a portrait

Demographic characteristics of those citizens who do not profess any religious affiliation and their attitudes toward politics are usually understudied in the religion and politics literature with few exceptions (Bolce and De Maio 2007). Generally relegated to a reference category in statistical models (even in my own research), the religiously unaffiliated are gaining some presence in an overwhelming Catholic country, such as Mexico, where 82 percent of Mexicans are Catholics (the 2010 census) and 48 percent attend mass every week (the 2010 ENVUD surveys). According to the 1960 census, less than one percent of Mexicans reported no religious affiliation at all, whereas in the 2010 census almost five percent of Mexicans reported being religiously unaffiliated.

The religiously unaffiliated are currently concentrated in the South of Mexico, in states such as Quintana Roo, Chiapas, Campeche, and Tabasco, as shown in graph 1. They also live in Northern states, such as Baja California, Chihuahua, Sinaloa, and Tamaulipas. All these states and few others exceed the national mean of five percent. In contrast, citizens who profess no religion are barely present in states in which the Cristero War* took place, such as Zacatecas, Guanajuato, Jalisco, and Aguascalientes among others.

The five percent of Mexico’s religiously unaffiliated are a modest figure when compared to one-fifth of the U.S. public, according to the Pew Research Religion and Public Life Project in this report released in October of 2012 (http://www.pewforum.org/2012/10/09/nones-on-the-rise/).  Demographics of the Mexicans who do not identify with any religion, also called “nones”, are a noteworthy topic to study, but given the size of this group, characteristics at the individual level through surveys are hard to capture using a standard sample size (around 1,500 respondents). The 2010 ENVUD surveys however included a massive number of face-to-face interviews across Mexico: 15,910 employing a sampling design which is representative at the state level. The ENVUD surveys** were administered in November of 2010 by different polling firms. The questionnaire included religious affiliation, demographics, and attitudes toward politics, among other topics.

The following tables compare the percentage of “nones” and the national proportion of several demographic characteristics. Mexico’s unaffiliated respondents are better described as single and educated men, who are urban dwellers, generally young independent voters, who rarely attend church. As shown in table 1, 60 percent of nones are men and 40 percent women, when compared to the fifty-fifty national distribution on gender according to the 2010 ENVUD surveys. Interestingly, the greater differences in civil status are leading by singles rather than by living together couples, then separated and divorced respondents, those who experienced widowhood, and then respondents who are married, status in which the nones are 17 percent behind the national proportion, as anyone could expect. 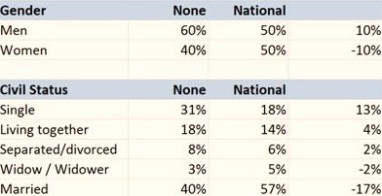 Regarding education, table 2 shows a very expected trend, additional years of education seem to increase the proportion of unaffiliated, especially among those respondents who attend high school and those who received college education.

Places in which respondents live also present some differences, as shown in table 3. The proportion of urban dwellers among the unaffiliated is five points greater than the national proportion of urban dwellers, and five points lower than the proportion of rural residents. Regarding frequency of attendance to religious services, weekly attendance is low among Mexico’s nones, but along similar levels when compared to the US (almost 7 percent in 2007). The most remarkable difference emerges from those Mexican unaffiliated who almost never go to church, around 90 percent, whereas seldom attendance among nones in the US is around 70 percent. In short, these numbers suggest that Mexico’s nones do not attend church in intermediate levels, they massively do not attend. Although this last result seems obvious, comparative perspective makes clear than Mexican unaffiliated are definitely far away from churches.

Regarding politics, one would expect more “leftists” and less right-of-center wing supporters among the religiously unaffiliated. Table 5 however suggests that Mexico’s nones are not more leftists than the national proportion of the Democratic Revolution Party (PRD) identifiers –the PRD is a center-left political party, which has been very close to win presidential elections (1988 under the logo of the Socialist Mexican Party, and in 2006 in alliance with two other minor leftist parties).

Certainly, nones identify less with the right-of-center wing, such as the Revolutionary Institutional Party (PRI) –as mentioned, the PRI is a right-of-center political party, the former authoritarian ruler, currently back in office at the national level, and the National Action Party (PAN) –the PAN is a right-of-center political party as well, which ruled the country the last two presidential terms (2000-2012). Thus, Mexico’s nones are not only less partisans but also more independents. In 2010, the main proportion of nones remained as independents, 64 percent, exceeding by 17 points the national proportion.

Finally, there is a report made by the INEGI (Mexico’ statistics agency), in which there are some demographics of the religiously unaffiliated using the 2010 census data (see page 10, http://www.inegi.org.mx/prod_serv/contenidos/espanol/bvinegi/productos/censos/poblacion/2010/panora_religion/religiones_2010.pdf). Descriptive statistics or statistical analysis about those citizens who do not report any religious affiliation in Mexico, taking advantage of surveys, seem to remain an uncommon practice among religion and politics scholars, or among magazines and newspapers editors, who essentially center their focus on census data. I hope this brief portrait would be useful to new studies about Mexico’s religiously unaffiliated taking full advantage of available massive surveys.

* The Cristero War was a popular uprising against President Calles’ anti-church policies (1926-1929) in which Calles expelled bishops and priests imposing anticlerical laws, and sponsored a “Mexican Catholic Church” using federal funding. Mexico’s bishops however did not take any leading role when compared to other actors, such as the National League in Defense of Freedom of Religion, or peasants, and the rank and file citizens from the Bajío region and other states, who fought the federal government because the high clergy went on strike, closing churches, and then, provoking the impossibility of getting confessions, communions or a simply celebration of mass. These peasants, in name of Christ the King (that’s why people called them cristeros) fought the federal forces from 1926 to 1929, when the concordat between the government and the church finally took place (Meyer 1973).